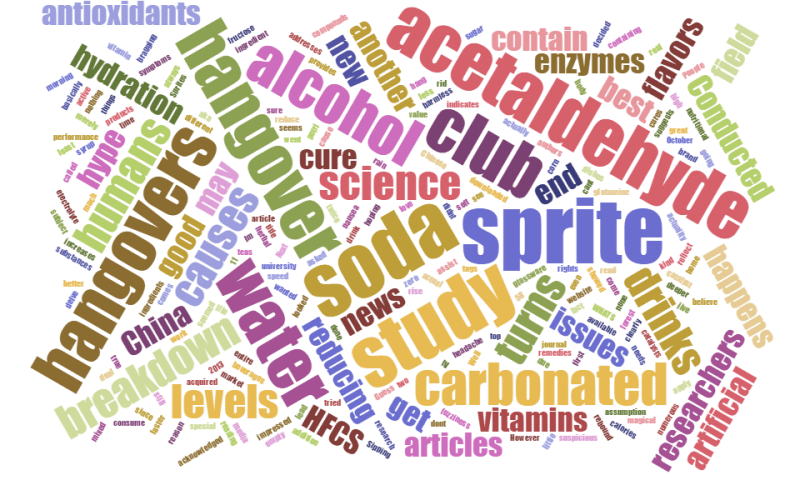 Sprite and Hangovers – What’s the Hype?

People who consume mixed drinks containing Sprite still end up with hangovers. Sipping Sprite the morning after is not going to get rid of a hangover.

I was asked about a new study that suggests Sprite may be the best new cure for hangovers. Upon reading a few of the news articles, it seems that researchers in China conducted a study that showed Sprite can reduce the levels of alcohol breakdown products that cause the symptoms of a hangover. Had the time come to hang up the IV? I am always suspicious of things that are too good to be true, so I decided to delve a little deeper into this subject.

I went to the website for the journal and downloaded the actual article, whose title indicates the authors of the study may have been hoping herbal teas would rise to the top. Conducted by a research university in China, the study was actually done in glassware and petri dishes, not on humans. They looked at 58 different beverages that were available in a Chinese market.

The news articles seemed to be impressed with Sprite’s performance in this study. Well, I read the entire study and it turns out that there was another drink that was twice as good as Sprite in reducing acetaldehyde levels. Guess what it was. Club Soda. I’m not sure why Club Soda didn’t get any love from the researchers or the media, but it clearly has more bragging rights than Sprite when it comes to reducing acetaldehyde levels. That said, even club soda can’t cure hangovers due to the fact that it is merely carbonated water. There are no special ingredients in it. At best, it provides hydration, but there is much more that causes hangovers such as inflammation and glutamine rebound. Club soda addresses none of these issues.

In the end, Sprite does not contain any kind of magical ingredient from the rain forest. It is carbonated water, high fructose corn syrup (HFCS) and artificial flavors. There are no antioxidants or vitamins. In actuality, HFCS increases inflammation in the body. In addition, club soda (aka soda water) is nothing more than carbonated water. For enzymes to work faster or better, there needs to be a catalyst, such as a vitamin or an electrolyte. There are no catalysts in soda water or Sprite. They contain no vitamins, antioxidants, or other active compounds. There is a reason that soft drinks are called “empty calories,” as they are basically carbonated water with sugar and artificial flavors. They have zero nutritional value.

This study at least tried to apply some science to the field of hangovers, which is to be acknowledged since there is not a great deal of science in the field. However, this study has numerous issues and does not reflect what happens in humans. People who consume mixed drinks containing club soda or Sprite still end up with hangovers. Sipping Sprite or another brand of soda the morning after is not going to get rid of a hangover. If the science does not jive with what happens in real life, then don’t believe the hype.