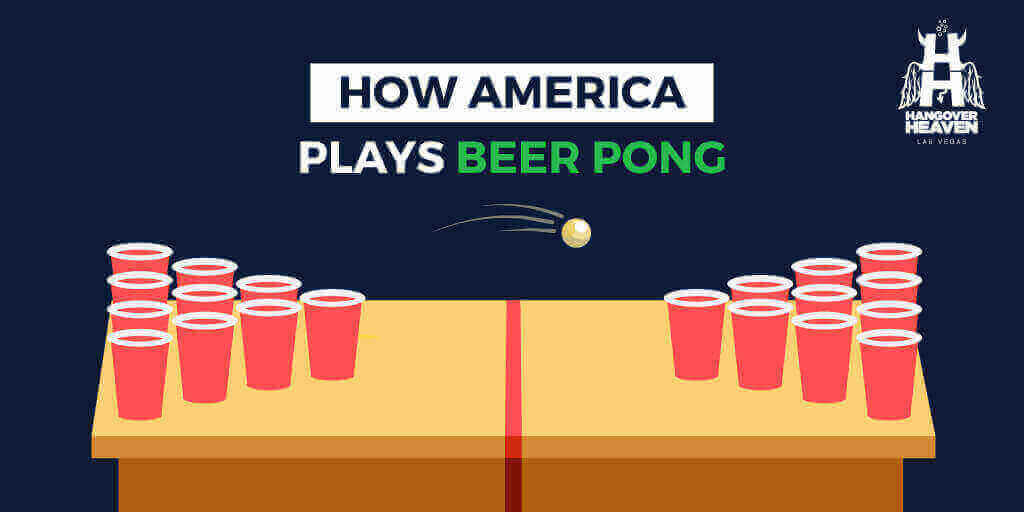 Updated: July 18, 2019 For many Americans, no night out would be complete without playing a drinking game or two. When it comes to the most popular of these alcohol-fueled activities, one game reigns supreme in the national consciousness, the game of beer pong. As experts in hangover prevention and treatment, here at Hangover Heaven […]

For many Americans, no night out would be complete without playing a drinking game or two. When it comes to the most popular of these alcohol-fueled activities, one game reigns supreme in the national consciousness, the game of beer pong.

As experts in hangover prevention and treatment, here at Hangover Heaven we have a keen interest in everything relating to hangovers, including the events that lead to people getting them. With that in mind, we wanted to take a deeper look at the king of drinking games. To take a closer look at the king of drinking games, we conducted a survey of hundreds of beer pong players from all around the country. Our survey covered game topics related to rule sets, beverage preferences, and more.

What we found in the survey shows most people have similar “house rules”, but because it can vary (quite a lot), it’s best to ask what the house rules are so you aren’t at a disadvantage. Otherwise, house rules like re-racking or what to do if a ball bounces become home field advantages.

Once it was all said and done we evaluated the data and created the following graphics illustrating the most interesting insights into how Americans play pong! First and foremost, we wanted to see the most common way players from across the country deal with some of the most basic questions relating to the game. We found that the method most frequently used to determine who goes first at the start of a new game is to let the team that won the last game go first. On the flip side of the game, the most cited method for garnering an automatic win was to sink both balls in the same cup, with 39% of respondents using that rule.

One of the more unexpected results was finding that 37% of people polled only allow teams to re-rack their cups a single time, a percentage that was high enough to beat out options like zero, two, and unlimited re-racks for the top spot. Less surprising was the finding that nearly half of players fill their cups one-third of the way full of the liquid of their choice when starting a game.

Speaking of those liquids, we wanted to know exactly what people prefer to drink while playing beer pong. As the name of the game would imply, it was designed to encourage beer consumption, and for the most part it succeeds at that for both men and women. 76.5% of men and 68.5% of women spend their games downing either their favorite craft beer or, on the opposite end of the spectrum, the cheapest beer available. Women had a notably stronger preference for cider, which they are over 50% more likely than men to drink while playing. Nearly 1 out of every 5 women said they like to consume liquor during a game, compared to under 15% of men. While beer pong players fill up their cups with all kinds of different liquids, they are very unified when it comes to what to do once a shot has been made into one of those liquid-filled cups, with 81% of people pulling them off the table immediately. This result makes sense given how many people play using the death cup rule we covered earlier!

There were a few other results in our survey where more than half of the responses were in unison. Two of these answers help form a picture of where most people commonly play beer pong (64% of respondents prefer a house party setting), and who they like to play with (72% of answers cited a friend as the top teammate choice). Additionally, just under 50% of those that took the survey said that 3-4 games played constitutes a normal night of beer pong. While 3-4 games in a night was the most common answer overall, diving a little deeper revealed some interesting insights into the differences between how men and women enjoy the game. We found that men are 63% more likely to play 5 or more games in a single night, which tracks with an additional finding that told us men are 20% more likely to call beer pong their favorite drinking game.

In terms of findings related to women, while the fairer sex’s top choice of pong partner matches up with the overall top choice of a friend, women are two-and-a-half times more likely to play with a romantic partner. Using drinking games to flirt isn’t a new concept, but apparently it’s one where men have some catching up to do!

No matter how they play, or who they play with, or what they drink while playing, it’s clear that Americans love their beer pong. For those that might enjoy it a little too much, here at Hangover Heaven we can help with nightlife prep supplements shipped all over the country or in-person IV solutions for those beer pong enthusiasts lucky enough to find themselves in Las Vegas when a hangover hits!