Anatomy of a Hangover – What Your Body Needs to Feel Better

Shortly after humans accidentally created alcoholic beverages, they discovered the hangovers associated with drinking them. Earliest evidence of alcohol consumption dates back to 10,000 B.C. in the form of jugs which held fermented drinks. One of the oldest known documentations of hangovers comes from the “Oxyrhynchus Papyri,” which were Greek writings discovered in an ancient Egyptian city in 1898, containing recipes for a plant-based hangover cure. In fact, Grecians would wrap strings of Alexandrian Laurel leaves around their heads to ease their headaches.

Today, most people have their own at-home remedies for combating hangovers, passed down from friends and family. While these “cures” may provide some temporary relief from hangover symptoms, they are usually nothing more than old wives tales. With technological advances in recent years, scientists and the medical community have been able to gain a more complete understanding as to why hangovers occur. Armed with this knowledge, they’ve developed cutting-edge IV treatments that attack hangovers head-on with a variety of medications, vitamins, minerals and supplements to counteract the chemical and physiological effects of a hangover.

To better educate people on hangovers and how IV treatments can alleviate them, we’ve created this informative guide, focusing on the science behind the symptoms and how the components in an IV treatment work to make you feel normal again. To get started, let’s understand hangovers a little better – what causes them and what the symptoms are. Hangovers are a complicated (and very misunderstood) medical condition (the medical term for hangovers is Veisalgia) and, surprisingly, the main cause is not dehydration!

With these components and symptoms in mind, take a look at the chart below to see how they relate. 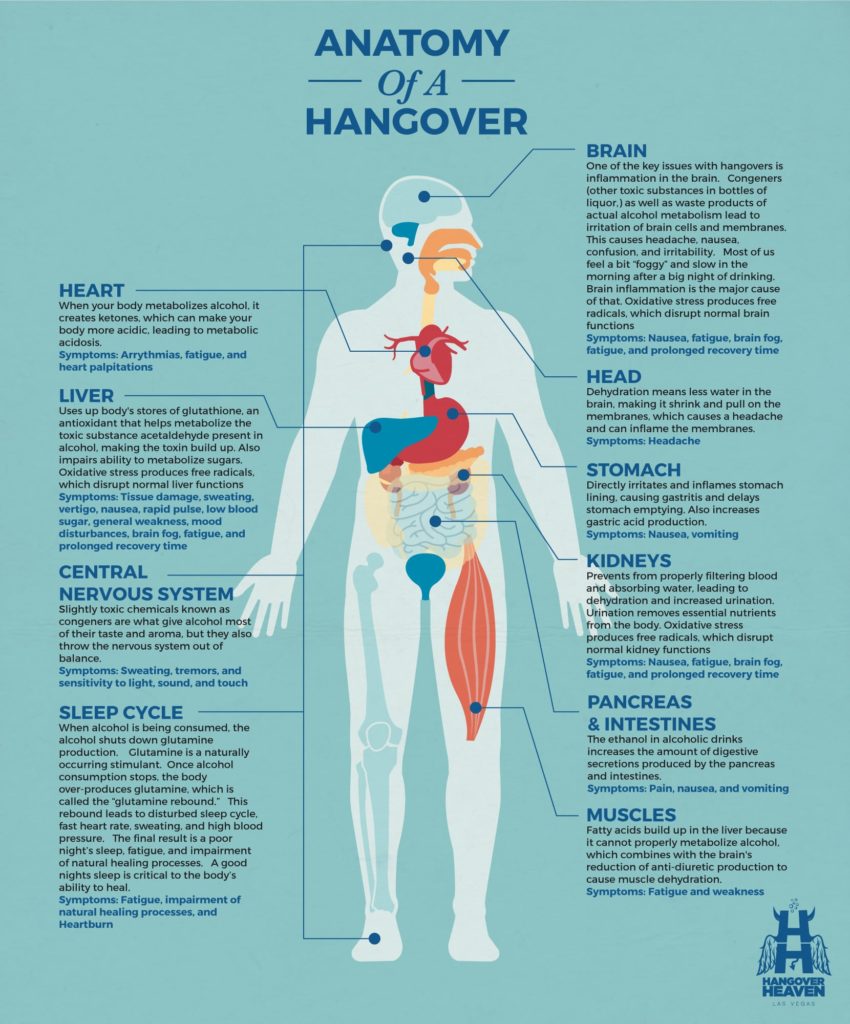 Headaches and nausea are probably the two most common symptoms associated with hangovers due to their persistence and and severity. At their root, both are largely caused by inflammation in the brain’s membranes. Alcohol consumption also effects secretion production in the pancreas and intestines, which causes inflammation and nausea. Oddly enough, by reducing brain inflammation, it can also reduce nausea.

One of the major contributors to a hangover is oxidative stress. Oxidative stress throws off the functionality of the brain, kidneys and liver, the latter two of which are crucial to properly processing alcohol. When acetaldehyde (a toxic component found in alcoholic beverages) is introduced to the body through alcohol consumption, free radicals are produced. They quickly use up your body’s natural stores of antioxidants, such as glutathione, which are needed to turn harmful substances into non-toxic products that the body can safely metabolize. Oxidative stress creates an imbalance in how many harmful free radicals are in your body, making it difficult to detoxify and neutralize them.

Oxidative stress causes all sorts of problems in the body by killing cells, interfering with cellular functions, and damaging the energy factories of the body. These issues lead to fatigue, brain fog, depressed mood, and headache. At Hangover Heaven, we use intravenous antioxidants and medications to treat hangovers and our hangover prevention product has a high concentration of antioxidants, which work to neutralize free-radicals that are formed during alcohol consumption and reverse the effects of oxidative stress.

Glutamine Rebound and Other Chemical Imbalances

The term “Glutamine Rebound” is what causes fast heart rate, night sweats, and sleep problems after consuming alcohol. Glutamine is one of the amino acids in the body that also acts as a neurotransmitter or signal between nerve cells.  When a person consumes alcohol, it causes glutamine levels decrease, which is why people get drowsy after a few drinks. Approximately 3 to 6 hours after drinking stops, glutamine levels “rebound” or spike to elevated levels (higher than normal). As glutamine is an excitatory amino acid, this results in a very shallow sleep, in addition to  well elevated heart rate, night sweats, and anxiety.

Alcohol consumption creates many other chemical imbalances including things like increased urine production which leads to dehydration. When these imbalances occur it alters the functionality of many different organs and internal systems, producing a number of negative reactions and side effects within the body.

Contrary to popular belief, hangovers are not caused by dehydration. The main issue with dehydration is that the concentration of alcohol toxins in your blood is higher. As dehydration is one of the more obvious and common physical signs of a hangover, it  has become synonymous with the condition as a whole, when in reality it’s one of many symptoms. As a result, many people erroneously believing that drinking water, Gatorade or Pedialyte will cure them of their hangover ills. While hydrating can help with recovery, it only addresses one component of a hangover, and does not provide prompt relief of misery endured by hangover sufferers.

There is no quick or magical at-home cure for hangovers. OTC remedies like ibuprofen, or drinking large amounts of fluids, only address a few of the concerns without repairing the intricate series of internal systems. 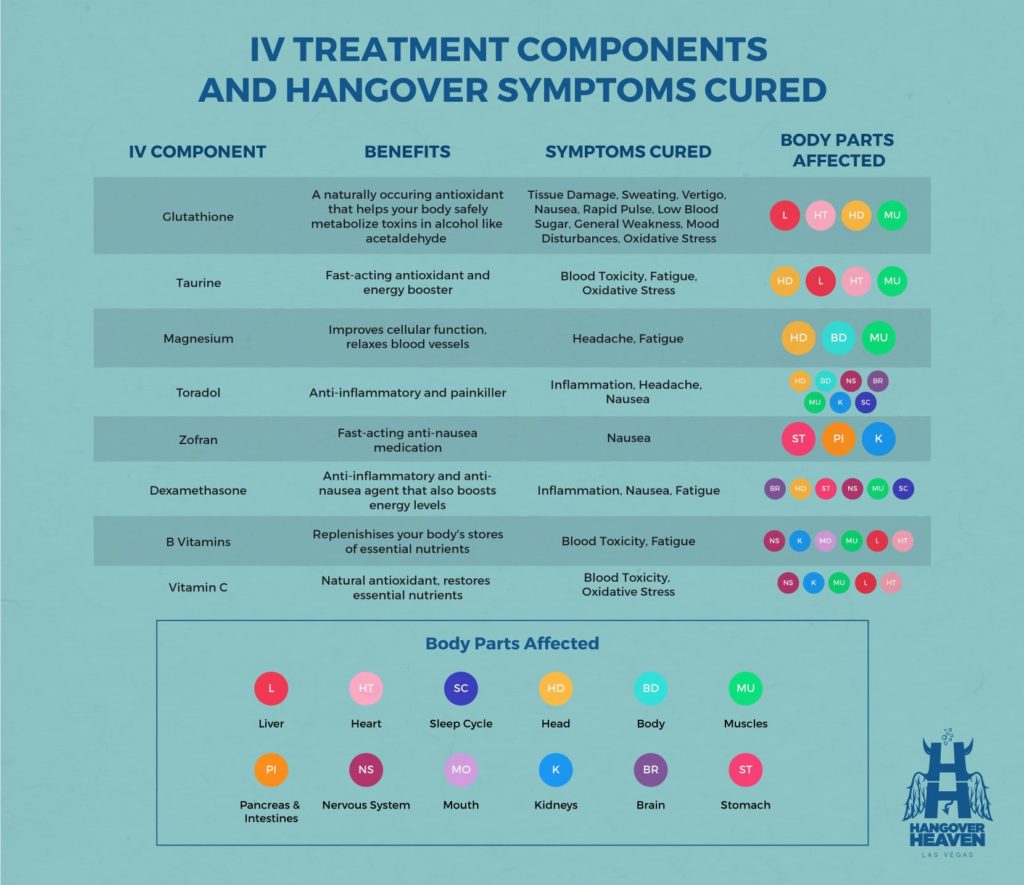 Alcohol’s effect on one part of the body can directly alter processes and produce negative reactions in other parts of the body. In order to cure the entire condition you must address multiple interconnected problems. With scientific knowledge of how a hangover affects the body, it is possible to develop a comprehensive cure that specifically addresses the root causes of the condition. IV treatments have emerged as the most complete way to quickly and substantially reduce hangover symptoms.

The complete IV treatments offered by Hangover Heaven include multiple components that address the chemical imbalances caused by alcohol consumption. Glutathione, taurine and vitamin C all reduce oxidative stress to crucial body parts such as the head, heart, liver and nervous system, which greatly reduces the overall effect of a hangover on the human body. Supplements like Vitamin B, Vitamin C, taurine, and glutathione counteract the more noticeable and lingering hangover symptoms like nausea, headaches, and fatigue. Taurine, in addition to being a fast-acting antioxidant, acts as a natural energy booster to combat fatigue. Magnesium relaxes blood vessels to allow better blood flow while also improving cellular function. Anti-nausea agents such as Zofran help soothe the physical discomforts, while anti-inflammatories such as Toradol and dexamethasone reduce inflammation throughout the body.B vitamins, which replenish the body’s stores of essential nutrients, and dexamethasone, an effective anti-inflammatory and anti-nausea agent, possess natural energy-boosting properties. When taken together, these supplements naturally give your both the energy it needs.

At Hangover Heaven, we administer a medication, Zofran, which is an intravenous anti-nausea medication that targets the brain to reduce nausea. In addition, we use an IV form of ibuprofen called Toradol. This powerful anti-inflammatory reduces inflammation throughout the body and acts very quickly to relieve headaches.

In spite of considerable media attention and the documented success of IV treatments, a general awareness of IV treatments has eluded many people. Many who have heard of the treatments don’t understand how they work or  how effective they are in treating Veisalgia, the medical term for hangovers. At Hangover Heaven, we specialize in these kinds of treatments and pride ourselves on having a success rate of over 99% when it comes to significantly reducing the hangover symptoms of our patients.